Roman Dobrokhotov, chief editor of The Insider, walks surrounded by police and journalists, in Moscow on Wednesday. Police raided his home after the investigative news organization was designated as a “foreign agent.” Last week, it became the 16th media outlet to be added to the Russian Justice Ministry’s foreign agents list. 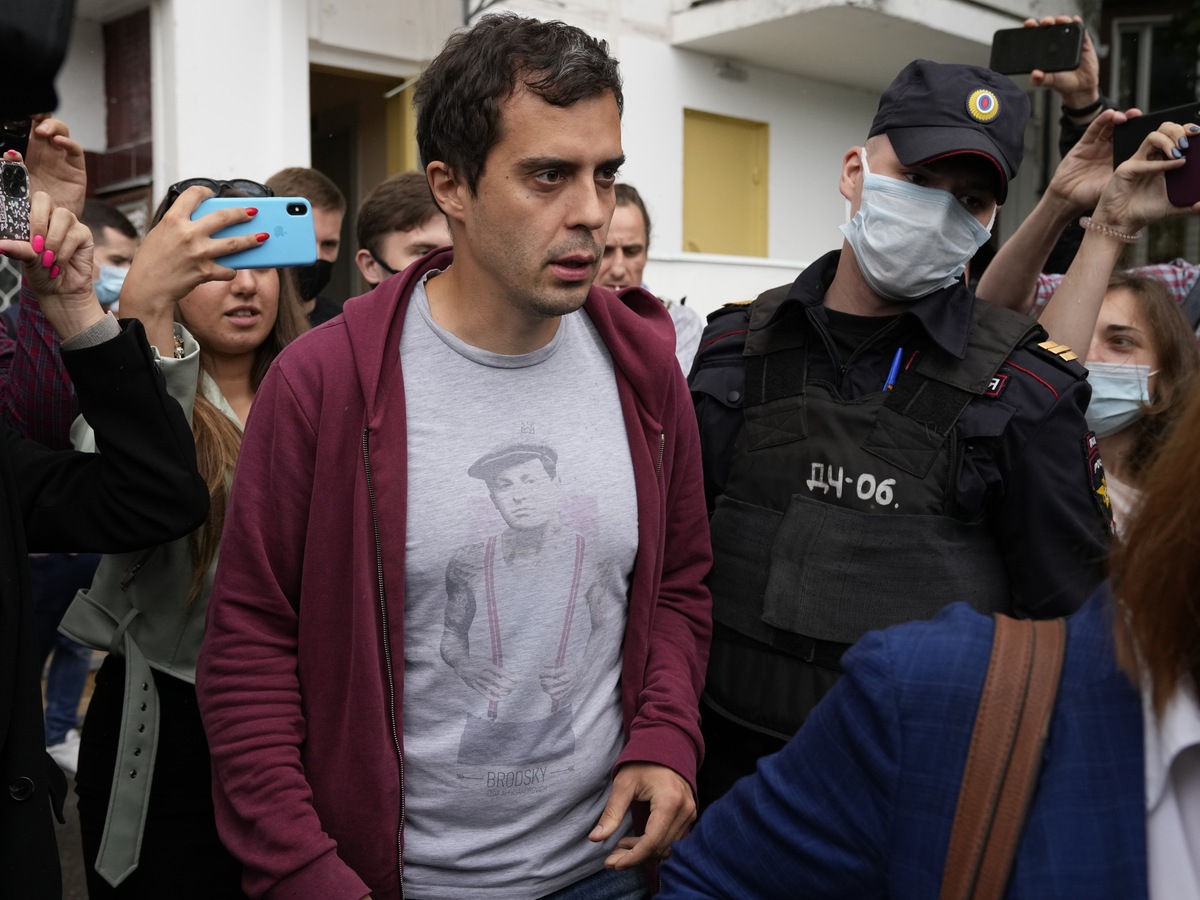 Roman Dobrokhotov, chief editor of The Insider, walks surrounded by police and journalists, in Moscow on Wednesday. Police raided his home after the investigative news organization was designated as a “foreign agent.” Last week, it became the 16th media outlet to be added to the Russian Justice Ministry’s foreign agents list.

She taught Russian to refugees in her hometown, St. Petersburg, and took part in street performances against militarism and violence against women. The activism of Apakhonchich’s art group was quirky and local, and their performances typically got a couple of hundred views on YouTube.

“It’s not a crime to teach Russian as a foreign language and get paid for it,” Apakhonchich says. “And it’s not a crime to be engaged in activism and go to demonstrations, especially in view of the Russian constitution.”

But the Russian authorities have treated her as if she were a criminal.

In December, the 36-year-old mother of two discovered that the Justice Ministry had included her in a list of “foreign media agents,” alongside media outlets including U.S. government-funded Radio Free Europe/Radio Liberty. Apakhonchich’s offenses were getting paid by organizations such as the French College at St. Petersburg State University and posting her political views on social media.

A month after finding herself on the list, Apakhonchich says, police sawed open her front door early one Sunday morning, confiscated her family’s electronic devices and spent seven hours searching their apartment for “extremist” material.

A self-portrait of Darya Apakhonchich, with the writing on her face and a figure of a woman saying: “Not only a body but a person, person, person, person, person.” She made the photo in support of Russian artist and LGBTQ activist Yulia Tsvetkova, who faces criminal charges for spreading pornography through her art. 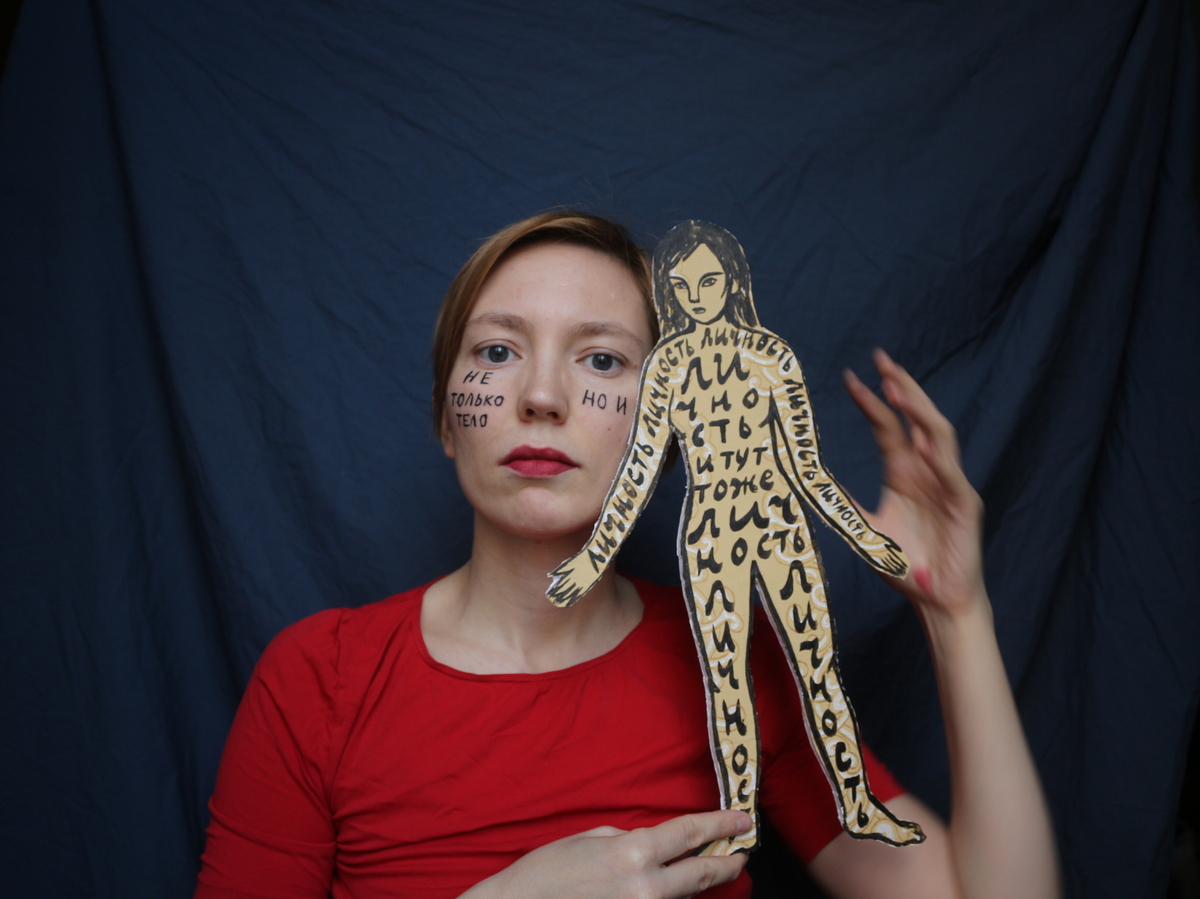 A self-portrait of Darya Apakhonchich, with the writing on her face and a figure of a woman saying: “Not only a body but a person, person, person, person, person.” She made the photo in support of Russian artist and LGBTQ activist Yulia Tsvetkova, who faces criminal charges for spreading pornography through her art.

Russia’s 2012 law on foreign agents originally singled out nongovernmental organizations receiving grants from abroad. The legislation has since been amended to target not only media organizations but also individual journalists, YouTube bloggers and practically anyone else who receives money from abroad and voices a political opinion.

Upon receiving the designation, they are required to label anything they publish — even social media posts — as the work of a foreign agent, and submit quarterly financial reports to the Justice Ministry. Bookkeeping mistakes and failure to comply can result in fines and even imprisonment.

At the end of last year, Russian President Vladimir Putin signed new legislation that expanded the legal definition of who can be considered a foreign agent. Since December, the Justice Ministry has slapped the label on more than a dozen Russian citizens, including Apakhonchich and Lev Ponomaryov, a human rights activist for more than 30 years.

Following the imprisonment of opposition leader Alexei Navalny earlier this year, the Kremlin has used the foreign agents law to go after journalists and news organizations that are critical of the government. Last week, the investigative news site The Insider became the 16th media outlet to be added to the Justice Ministry’s foreign agents list.

VTimes, an independent business news site, closed in June, saying its designation as a foreign agent had destroyed its business model. Radio Free Europe/Radio Liberty faces more than $3 million in fines for refusing to label its content as being produced by a “foreign agent.”

Meduza, a popular independent news site, has struggled after being labeled a foreign agent and appearing on the Justice Ministry’s blacklist in April. In 2014, dissident Russian journalists founded the site in neighboring Latvia to shield it from Kremlin pressure. Meduza later branched out into podcasts and an English-language version.

“It’s harder to talk to people now because a lot of people who would gladly speak to us are now wary of being associated with a ‘foreign agent,’ which is a huge impediment,” says Alexey Kovalyov, Meduza‘s investigations editor.

After the designation turned Meduza into a “toxic brand,” Kovalyov says, advertisers fled. A crowdfunding drive has brought in donations from 96,000 contributors, holding the site afloat at least for a few more months.

“What happens after that, no one knows really, because we don’t know how sustainable this crowdfunding model is,” Kovalyov says.

The Kremlin denies that the foreign agents legislation is censorship, and Putin often compares it to the U.S. law on foreign agents. On paper, the laws may be similar, but human rights groups say the Russian authorities use the “foreign agent” designation as a way of stifling dissent.

“Since 2012, the Russian government has used the ‘foreign agents’ law to demonize independent groups that accept foreign funding and carry out public advocacy, especially those that in any way challenge government policies and actions,” Human Rights Watch said in November. “In Russia, the term ‘foreign agent’ has a strong negative connotation, akin to ‘traitor.'”

When the Russian law came up in a meeting of the Kremlin’s human rights council in December, Putin recalled the case of Maria Butina, a Russian citizen who spent more than a year in U.S. detention after being charged with acting as an unregistered foreign agent. Putin told the council that it was necessary for Russia to designate individuals as foreign agents because “some people are simply inventing new ways of getting money from abroad for their activities.”

Putin told NBC News in June that many organizations of “so-called civil society” are financed and receive training from abroad. “To prevent this kind of interference in our domestic affairs, we make relevant decisions and adopt relevant laws,” he said.

For the Russian authorities, Putin’s hard line is a green light to crack down on civil society.

“The way they perceive civil society is: ‘He who pays the piper, calls the tune,'” says Maxim Trudolyubov, a contributing editor to Meduza and a senior adviser to the Kennan Institute at the Woodrow Wilson Center in Washington, D.C. “They decided for the public that the reason for anything that goes wrong comes from the West, from abroad.”

Trudolyubov says Putin needs to manufacture threats to keep his grip on power. But the “totalitarian instinct” behind the Kremlin’s foreign agent law, he says, clashes with the complex, diverse society that Russia has become.

“Putin himself is part of a generation that remembers the Soviet Union very well, and he wants to be in control,” says Trudolyubov. “He is very nervous to see he cannot achieve that kind of control and that there are parts of society that reject him.”

Apakhonchich, the activist and teacher, represents a new generation of Russians. After the police raid on her home, she moved with her children to neighboring Georgia for the family’s safety. She says that her designation as a foreign media agent was designed to send a signal.

“I believe that I was chosen to intimidate people who, like me, cooperate with foreign organizations,” she says.

In May, a St. Petersburg court upheld her blacklisting. But Apakhonchich refuses to be silent.

“Maybe I could have gone back to just being a mom,” she says. “But I understand that people still face repressions even if they say nothing, don’t give interviews and hope that by sitting quietly, everything will be all right.”